According to Bonnie Baskin, founder of ViroMed and AppTec Labs women are wired to be better entrepreneurs.

Well read her interview with Robert Jordan (Author of “How They Did It: Billion Dollar Insights from the Heart of America”) and then share your thoughts and insight.

Some people need to just think before they speak, or simply refrain from answering a question when they have absolutely nothing of intelligence to say in response. Case in point…again… Oklahoma state Representative Sally Kern. 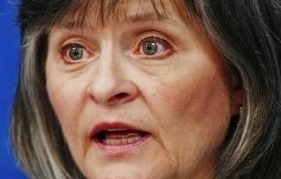 This woman appears to have what I call, “brain-mouth disconnect syndrome” whenever a microphone or reporter is nearby. Her mouth gets to yapping but her brain is totally disconnected from the process. She needs a handler who does a better job screening what comes out of her mouth. Do you remember when three years ago she made the comment that gay people are destroying the United States and were a greater threat than terrorists? If not, I have included the link to this footage at the end of this post. Do you remember Kern’s Divorce Bill that would have made it hard for people to get divorced in Oklahoma? Yes, I included that link below as well.

Well Ms. Kern has really stepped in her own mess last Wednesday during an affirmative action bill debate she back-handed both women and African-Americans by saying that women don’t work as hard and earn as much as men because they are more concerned about raising their families, and the high incarceration rate of Black people must have something to do with them not wanting to work hard in school.

“We have a high percentage of blacks in prison, and that’s tragic, but are they in prison just because they are black or because they don’t want to study as hard in school?…I’ve taught school, and I saw a lot of people of color who didn’t study hard because they said the government would take care of them.”

But let’s hear it directly from the horse’s mouth shall we? Oh and look at the body language and reaction from her constituents in the audience! Thank goodness for YouTube…

Yep, she said it and after coming under attack and her people returning from their extended lunch break (I’m joking about the latter) she tries to clean up her comments by saying that women are some of the hardest workers in the world, and that what she said didn’t come from her “true spirit“. Okay so where did it come from? Will people have to question which spirit (true or false) she’s speaking from every time she opens her mouth?

Maybe it’s time for Ms. Kern to take some sensitivity training, or re-training. Anthony Davis, the President of the NAACP Oklahoma chapter is cutting Kern no slack and is standing firm in his call for her resignation, and urging Kern’s constituents do the same- saying, “Let’s send a message out that in Oklahoma we will not tolerate racism at its ugliest level.”

See the Oklahoma news KOCO report that covered the story and interviewed both Anthony Davis and state Representative Mike Shelton:

I’m all for freedom of speech but when do we draw the line especially when words of hate, bigotry, and racism come from the mouths of our country’s leaders, influencers, and those who intend to lead?

If we are to be the example for the rest of the world to follow why then should we be surprised that there is so much hate spewed about our country and our people? We talk about athletes and entertainers being role models and that they should watch what they say and do, but what about highly visible business people and those in government positions who serve the people of this nation? What standards are set for them, or are they not considered role models?

What are your thoughts?

Oh and by the way here’s the link to her Divorce Bill recommendation: http://youtu.be/tXYKe4gdeRo

And her remarks about gays in 2008 in case you never heard it or need your memory refreshed: