Ah the title of this post got you didn’t it?

Did you ask yourself, “what Canadian detainees?” Most likely you did, because guess what we’re not talking about because we’re not hearing about it? Canadians who illegally cross the border into the US, what the US is doing to deter this activity, and how the US handles the separation of the adult detainee from their child.

I mean, we know what’s happening to Latin and Mexican immigrants who cross along the southern border of the US. We’re reading the horror stories of children being treated like little orphan Annie and Oliver Twist (sans the wealthy adopted dad and huge inheritance, respectively).

Imagine reading about US citizens being treated this way in Canada, Mexico, Central America, South America, or the Caribbean. Imagine reading about our children being forced to live months without the comfort of human touch—even from a sibling; no letter writing, no crying, and little to no phone contact with family for weeks and months. Visualize babies, toddlers, and other children who one moment were holding the hand of a parent, and in the next are forcibly placed in a van or bus and transported hundreds or thousands of miles away from their parents.

So how do the conditions of our Canadian detainees similar or different? When they illegally cross the border each day and enter the US, what is it like for them when I.C.E. detains them? Do their children get placed in camps with French names, to make them feel at ease? Spanish-speaking detainees are placed in camps named “Casa de Guadalupe” I suppose to provide the feeling of ‘home’. But it’s nothing like home and just because there’s hundreds of other kids there who speak your language and have similar and same skin tones as you, that doesn’t make them family. Besides, wouldn’t you be able to sleep in the same room with family? Wouldn’t you be able to hug family? But, youth detainees are separated from their siblings and just like the other detainees, siblings can’t touch—no hugging your sibling.

Yet politicians and greedy facility operators want to pitch this almost utopian environment of a “summer camp” experience, at some of the locations that are situated in areas where most middle class and wealthy families would consider the great summer camp experience.

Umm but excuse me—the privileges of summer camp include: family drops us off and picks us up when camp is over, we can write and call family whenever we want, when we’re homesick our family can come visit us or even take us home, we’re not restricted from touching and hugging other campers and definitely not restricted from doing so with family, we’re allowed to cry, and we’re allowed to opt out of participating in activities. Also, for the most part, food at summer camp doesn’t sound like or resemble prison food menu options.

Even our state and federal jails and prisons allow for visitation and mail service for the majority of their inmates.

Don’t blow smoke up my butt and tell me these traumatic experiences that these children are enduring are like summer camp.

Let I.C.E. snatch your child out of your comfy home, have them taken to one of these camps, and then ask your child “did it feel like summer camp or prison?”

So back to our Canadian detainees, the families that illegally enter the US—what is their experience like when their caught crossing the border or swept up in a raid for living here illegally? Do their children stay in similar camps or the exact same camps as the Mexican and Latino children that we keep seeing and reading about? What are their experiences like? Is it not happening to them or is the media not covering their horror stories, much like they do when not covering instances of police misconduct and brutality towards other nationalities and racial groups as they do when pushing the hot button of mistreatment of African Americans by law enforcement?

I did read this article about the French woman who was jogging in Canada, visiting her mother, and didn’t realize she crossed the border into the US (because there’s no warning signs posted) and border patrol in Blaine, Washington detained her for two weeks. But looking at her photo and seeing her brown skin, it only reinforces the visual bias argument of why she was most likely stopped, questioned and detained. Interesting enough, her mother was able to visit her several times at the detention center—something that we don’t hear about in the thousands of other stories.

I mean of course, her story was a case of accidental border crossing. Out for a little exercise and before she knew it she had handcuffs on her. So maybe while she waited for the bureaucracy to catch up to her reality, border patrol felt it acceptable to allow her visitation from her mother. Wasn’t that decent of them.

Read this recent NY Times article and then let me know if this is an all-borders issue or just southern border issue. Share your insight, experiences, and opinions on this matter. Share your answers to my questions listed above.

I don’t know about you, but in my opinion, I think if the roles were reversed and these were Americans being handled and treated this same way, there would be even greater outrage and even faster action towards civil and dignified resolution.

Imagine what these weeks and months of damage and isolation from family could potentially do to a young mind. Yes, for the most part children are resilient. Some endure trauma but are never the same. And some break, to grow up to be the very thing society fears. What are we doing to these children we keep in jails we call camps? What are we teaching them? What are they learning about this place we call America, the land of the free and the home of the brave—built by and thriving because of immigrants? 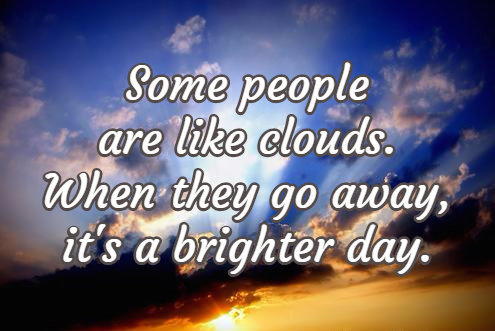 I heard this quote on July 1st and it made me laugh. It’s true, in my opinion. Some people are just like clouds. They come in and cast a shadow over you, change the energy around you, cause uneasiness within you. But then when they leave–oh wow, everything seemingly regains light and life. There is indeed a shift when they arrive and when they leave.

Here’s the trick: identifying the ‘clouds’ in your world and then making the decision to either limit your contact with them or steer clear altogether.

We do have choices.

Even if one or more of the ‘clouds’ are related to you, and some of you may not want to admit it—but they are in your life, seemingly waiting to stir up a jaw-dropping storm just because they can—but you do have a choice as to how much time and energy that you invest in that person. Just as you have a choice with deciding the time and energy you invest in every person that you encounter.

You also have a choice as to how you respond to their presence.

You don’t have to give in to the pressure to feel negatively about your interaction with this ‘cloud’. You can choose whether to open the floodgates of toxic waters or to relish the sweet moments that you were enjoying before the ‘cloud’ appeared. I’m beginning to learn how to do the latter. It’s better for the mind, heart, body, spirit, and soul. It truly is.

Why on earth would I help a cloud rain upon me?

Grab an umbrella, poncho or rain coat, a hefty pair of rain boots, and get to splashing. Splash until the rain stops and the cloud clears. Don’t derail your day. Don’t be drained of the light that you were carrying around. Push past it and know that soon, just like all clouds, this one will be sliding off away from you.

Have fun with the smile that grows on your face as you think about this truth. The ‘cloud’ will wonder why it’s planted there all big and bold. Smile bigger.

If the ‘cloud’ is leaving, to never return, then smile bigger. Smile like the Kool-aid man in the commercials we loved years ago.

Your day and all days after will be brighter because that ‘cloud’ won’t be a part of it.